I was dubious about starting this game. After having fairly recently played Final Fantasy X and (shudder) X-II, did I really want to start another 300 hour adventure where I don’t know what’s going on? As I watched my other half play it though I slowly realised that yes, I did want to play it! I actually wanted to play a Final Fantasy game! My reasons for this are a little unexpected; My main reason is that I really like the graphics. Yes, they’re not realistic looking or cinematically breathtaking like recent Final Fantasy games but… I kind of like that, in fact I prefer it. I’ll delve more into why a bit later. The tipping point was the introduction of an unexpectedly adorable character:

He is the most adorable little mage I have ever seen and I love him. He also has one of the best Final Fantasy name so far… I think so anyway: Vivi. It’s not over the top and it’s not too boring. I may name a future pet after him. Not only is he adorable and named well but he also has a heart wrenching back-story which I am absolutely hooked on, more so than the main plot. *Brief spoilers for the rest of the paragraph * He finds all these mages that look like him and he’s all excited but then they’re basically robots and don’t acknowledge him, when he gets attacked though they all go in front of him to protect him and then they get thrown over the side of the ship and it’s so sad… I felt tears welling up, how can things that only have eyes be so expressive??? Then everyone is so mean to him because they think he’s the enemy! Now all his mage friends have joined the dark side… If anything bad happens to little Vivi I don’t know what I’ll do.

On to what I was saying about the graphics: I think one of my big issues with modern Final Fantasy is that it’s these super epic looking games with incredible graphics, huge weapons and battles of epic proportions etc… Then you actually play and the battling is… Well it’s just so boring. They stand there looking so badass and cool and you have to wait for what seems like forever while their ATBs charge then finally they move… Then go back to standing…  Wait… Then move again… It’s an unrealistic element in a graphically realistic looking game and it always bothers me. As the graphics are so different in IX though I don’t mind it, it feels more normal. It reminds me a bit of Pokémon which is the only other turn-based game that I play regularly.

Something else that I am pleasantly surprised by, and which I did not expect to happen at all, is that I actually know what is going on. A time may come where it gets overly complicated but for now it’s perfect.

My only critique is that Garnet and Zidane’s relationship and places in the story are very similar to Tidus and Yuna from FF X where we have a male character who the game is trying to convince me is the protagonist while there is a female character painted as the love interest/damsel, but the plot is actually revolving around her. It’s a little frustrating, I would like to play as Garnet/Yuna, I feel like sometimes it would make more sense… Maybe that wouldn’t have gelled so well with their target audience though. I also feel a bit weird reading about Zidane’s womanising ways… He’s 16?! Like hell he’s done half the things he’s talking about, and even if he had are we supposed to be charmed by that? “Oh, he’s such a bad boy!” I don’t think so.

Speaking of inappropriate things, it’s butt appreciation time starting with Garnet: She was obviously the most liked character from the developer side what with her butt being the most lovingly rendered thing in this entire game:

There’s the all-female army, the higher their rank, the more clothes they wear (and they become brunettes too, obviously).

Then there’s this dude who is literally a walking butt… To be honest I thought he was a girl until I was told otherwise. I found the slender waist, thong thing, and long hair a bit misleading, plus I’m envious of his eye shadow. Anyway he must be pretty cold. Finally, best butt of the game (so far): Quina (or Quinoa as I’ve named him/her). I mean it’s not as obvious as the rest but look at him/her. There is something keeping that dress in that shape is all I’m saying. 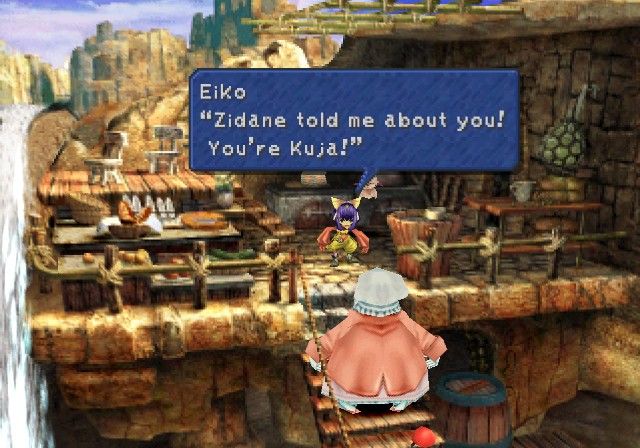 To finish this post I had a little fun naming some of my team so I thought I’d share a few with you: I was immediately disappointed that I couldn’t rename Saiyan reject Zidane as – what I thought was hilarious – Zig-a-zig-aah (come on, it would have been funny), 8 characters max! I re-named Steiner as Potato so that he’s referred to as ‘Captain Potato’ throughout the game, I know how to have fun. Finally, I gave Princess Garnet this perfect fake name for her ‘common’ alias: Garnot. No one will ever know…

Have you played FF IX? What do you think about the difference in graphics between the older games and newer games? Which do you prefer?