I’ve met The One, my friends – he works several jobs to support his sick mother, he enjoys hanging out in parks and, perhaps the most endearing quality… He’s a rock dove. Before you go judging me and my life choices, please allow me to explain our love story…

Ryouta and I were childhood friends, he a rock dove and me a human girl, an unlikely friendship to be sure. Later in life we both attended the same school: PigeoNation’s Institute. Why am I in this bird school when I am human and not actually a bird? That is a good question, but we don’t have time to think about that right now. Upon starting this new school, Ryouta told me that his mother was sick. He works several jobs to take care of her, even though he is often ill himself. We still managed to have fun though, despite his busy schedule! We went for walks in the park and participated in the three-legged race together (yes, we made a strange couple, a bird and a human doing a three-legged race- but it was OK, he basically carried me most of the way; his bird feet are so strong). Ours was a story steeped in romance and feathers, and ultimately, tragedy. This is the tale of how I met – and lost – my one true dove. Uhh, love.

Are you still with me? I should hope I wouldn’t have to clarify this, but I understand that the above story may be a little convincing, so I’ll say it just in case: I’m not really dating a rock dove. This is the result of me playing Hatoful Boyfriend which I downloaded for free (like hell would I pay for it) as it’s one of the free PS+ monthly games. I had heard about this game before and was mildly curious about it –  I thought it was a dating simulator where you could date birds, but that’s ridiculous, that can’t be right… Right? Well after I disbelievingly played through it last night, I can confirm that yes, it is indeed a dating simulator where you date birds. Mostly doves to be precise (or a sparrow, or a super creepy Partridge if you’re that way inclined). I have never taken so many screenshots in such a small space of time by the way, so be warned that this post will have lots of images of doves saying some really random stuff, like this…

So what on earth happens in Hatoful Boyfriend? Well, I will attempt to tell you – ‘attempt’ being the key word here. You are a human girl (my name was BuuurrrRd perzen – Rick and Morty tribute) and you go to a school which is only for birds. An exception has been made in your case, why? Because reasons. (Seriously, they go to explain it and then your character gets cut off mid-explanation and it’s never brought up again.) Just into the start of the game I had a bit of a screenshot frenzy.

There don’t seem to be any other females, bird or human, in this school, leaving all the hot dove tail feathers for you, yay! So, without further ado let’s meet our bachelors (in person and dove/pigeon/bird form!)

First off we have Ryouta, your childhood friend: 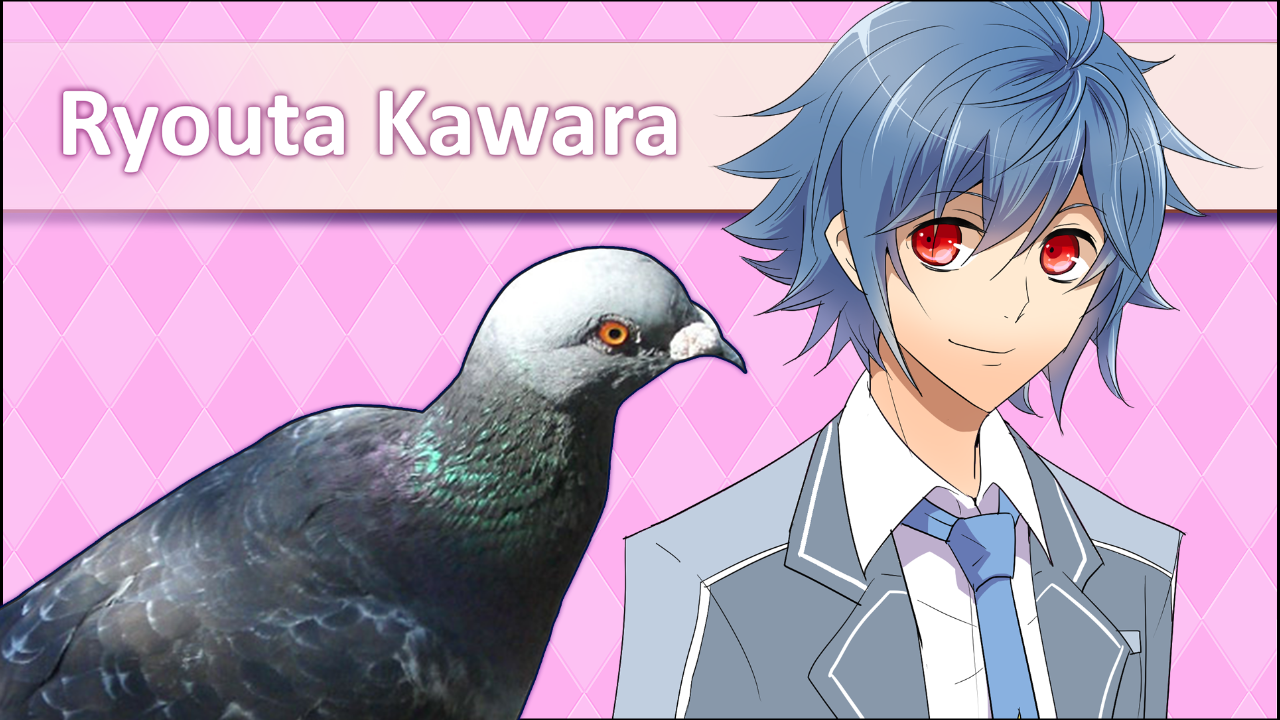 He’s the sweet, kind of quiet but would stick up for you, friendly, no huge quirks, has a sick mother that he has to look after so he’s always super busy, also has health issues so they often get in the way of him doing things. Basically, the ‘normal’ option.

Then we have the posh one, a Fantail Dove named Sakuya. He is a Japanese/French aristocrat (I don’t know if that means fantail doves are French but he lives in Japan or if that means he is French by parentage… I don’t care enough to find out.) This guy was the one I was actually going for, because every time he appeared on screen it was like BAM CHECK OUT MY TAIL. Apparently fate didn’t lead me in that direction though. He’s very up himself, but it’s OK, you can bring him down from his high bird table and show him the fun, common, things in life. Trying to date this bird is basically living through the song ‘Common People’ by Pulp, if the girl was a bird and it was set in Japan that is.

Now there’s the kooky, sporty, mentally unstable dove named Okosan. He REALLY likes sports and pudding. He can also talk using brackets, it’s very impressive. I tried to avoid this one because I had no idea what he was talking about and was struggling to understand what was going on as it was.

Then we have the teacher, Kazuyaki. He has narcolepsy, which is very sweet and endearing. He’s also very nice and will let you know how well you’re doing at school by telling you that you did OK… Actually no wait you did terribly. 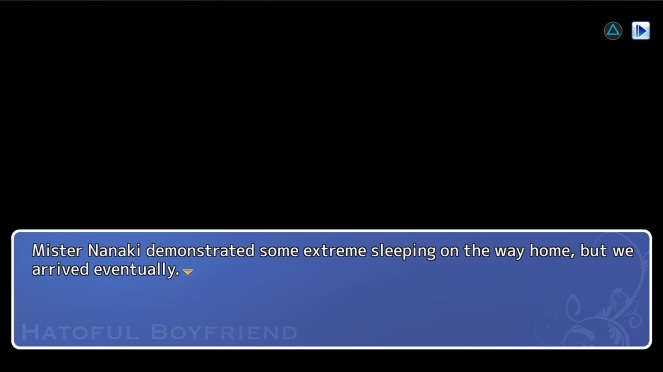 Finally we have creepy, sexual assaulty, ‘I will drug you’ Partridge, the school doctor. I was really hoping he would be called Alan but no, his name is Shuu. I don’t actually know if he’s a romance option, I guess he is? He seemed more like the bad guy, but nothing really happened with him after a while. 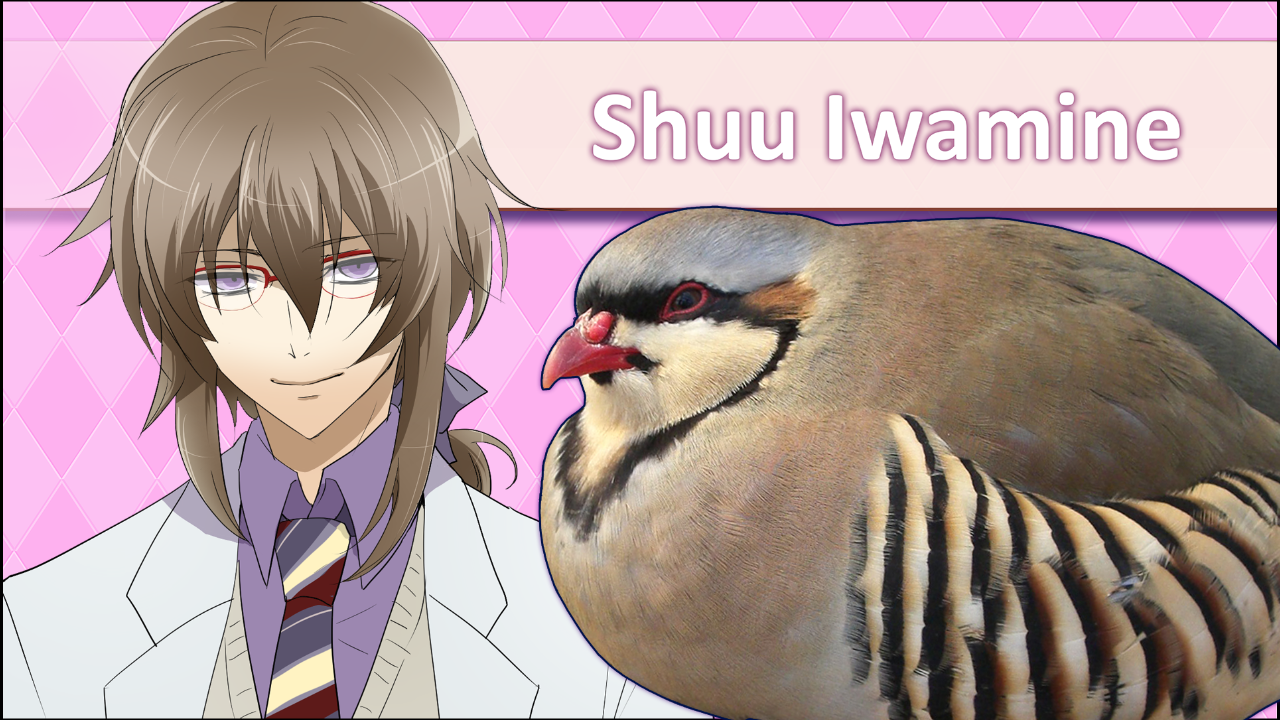 There were some more characters which, depending on the choices you make, you can romance as well (I think) but the above were the main ones that I came into contact with, I would however like to give a special little shout out to a sparrow that I met, the only other female I met in the entire game actually, the only reason for her shout out being that her theme song is quite something – it sounds like I just got into a boss battle…

I’m going to have to put a little list of random things here that I couldn’t help but question while playing this game, despite the fact that I know there is no point because the game is basically just saying “dude, just go with the flow” the whole time you play:

The game finished after about an hour, maybe a hour and a half. I guess the idea is that you play through it with different choices and get a different bird depending on the outcome.

So my outcome with Ryouta, who I hadn’t even been going for in the first place, (Ryouta romance story line spoiler alert – although if you really care that much, you should probably have a good think about your life) ended up getting pretty sad. Basically I helped him get another job, found him working at his secret part-time job, reminded him that he would be dead if it weren’t for me so he owes me his life, comforted him when his mum died (at this point I was like damn, this game can be a bit sad) then it was Legumentines Day (basically bird Valentines’ Day). I bought my bean with the posh dude in mind – we’d been to the fair and were running the student council together. I thought I had a shot. Then up comes Ryouta and, oh shit! He gave me a bean! What do I do? His mum just died, I can’t not take the bean! What about my posh guy? Turns out I didn’t have to worry, because after buying the bean you have literally no other choices to make. We hashed out some relationship issues, like him having a shorter lifespan than me being a bird and all, and that lifespan being even shorter anyway because not only is he a bird, he’s a sickly bird. Turns I can be really diplomatic when all I need to do is mash X, and I think we ended up agreeing to get married. Here is our love story in pictures:

Playing this game was an emotional roller coaster.

To be honest, as mad as this game was it was fun to play. I was sat with my other half going through it and we were both laughing the whole time, if I had been playing it alone I dare say I wouldn’t have enjoyed it as much. If you have a friend over and fancy playing something funny then I would recommend it, but I wouldn’t spend more than £5 on it, and even that is pushing it to be honest. Or maybe I’m just stingy? It’s also quite clear that the designers are taking the piss out of themselves so it’s not really a sense of “oh, what have they done?” super-cringey playing, it’s more in the Goat Simulator/I Am Bread ‘this is weird and I’m into it’ sort of realm.

Have you played Hatoful Boyfriend? Did you pay money for it? If so, do you regret your decision? Who was your dove boyfriend? Would you play this game?

I’m just going to chuck some random images in at the end here that I didn’t get to put in above, please enjoy. 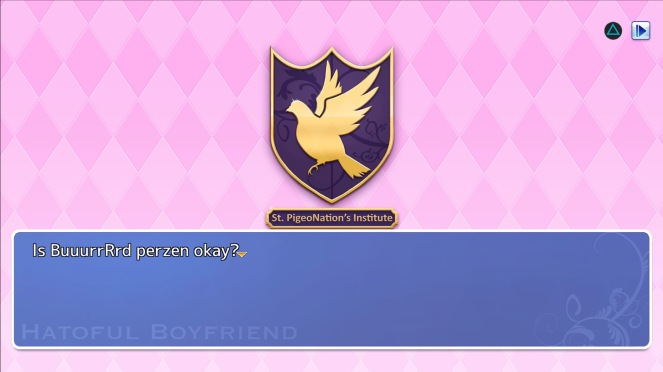 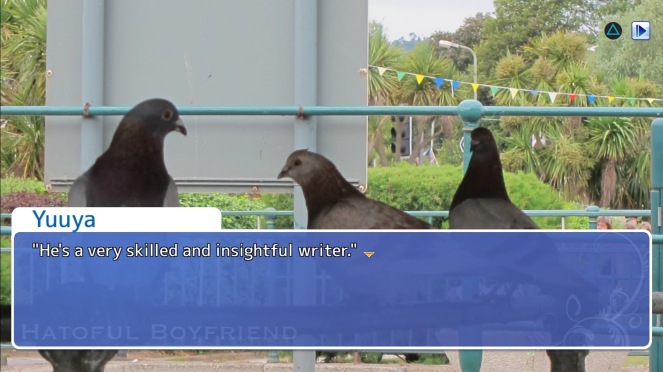