I’m a Hufflepuff, I’ve seen all the movies, read all the books, won a pub quiz (granted that was a team effort), been to Harry Potter studios (UK version), I really don’t want to know how much money I’ve spent on merch… Basically, I’m a pretty big Harry Potter fan (Not the biggest by any means, but still). I was also a big fan of Pokémon Go when it came out so when Niantic’s latest venture, Wizards Unite, was announced I was pretty excited (obviously I’ll be comparing the two throughout this post). The big day finally arrived and I downloaded the app, very keen to start playing. I’d planned to walk into town (about a 20 minute walk) with the app to start me off and meet some friends for a drink, I set up the game and the chirpy Constance Pickering introduced herself and the game. Then she kept introducing stuff… I need to start walking now, let’s go Constance! This introduction is a bit long for a game where you essentially walk and collect stuff and I missed a bit of plot by getting frustrated and skipping text until I could walk around. Constance basically goes on about Confoundables that have appeared and you need uncounfound them, that’s basically the overall jist of the game.

What are Confoundables then? Well, as far as I can tell (from my skim reading and impatient tapping) Confoundables are some sort of dark magic spells and beasts that have removed ‘Foundables’ (I know, eye roll) aka creatures, students, ministry workers, artifacts, quidditch supplies, etc. and scattered them across the world which, as their insanely creative name indicates, you need to find. As an SOS (Statute of Secrecy) worker you need to find the lost Foundables, unconfound them, and return them to their rightful place by tracing patterns/spells on your phone and overpowering the Confoundable protecting the Foundable. Where do the Confoundables come from? Why are they here? Who created them? We don’t know but as you return more Foundables to their rightful place Constance, Harry and other characters we know and love try to unravel the mystery and have chats about it. This sort of indicates that there’s an end-game and that we’ll eventually discover who’s causing all this… 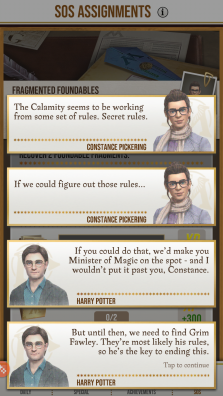 Back to my walk… Maybe I’m just incredibly impatient or something, I know every game needs a little tutorial but trying to get out on the road was a never ending battle of Constance interrupting me telling me about all these things I was finding and what they did. I can figure it out Constance! Let me move! I didn’t remember Pokémon Go having such a wordy tutorial. In fact, my sister has come to visit for a few weeks and she downloaded Pokémon Go for the first time and was off to a flying start in about half the time I was in Unite. Maybe I should have cleared some time to sit down with it a bit first before trying to immediately set out on my walk but I didn’t think so much would be happening. After about 20 minutes of very slow walking I put my phone in my bag so that I’d actually get to town before the pub closed. To be fair, now that I’ve done most of the stuff there is to do I don’t get interrupted by Constance that much anymore, she still crops up occasionally though, and I guess you need to expect to walk slowly when playing so having a time limit on my first test might not have been the best way to do it. 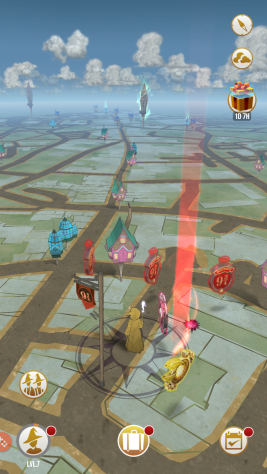 In all honesty I expected this app to be a Fantastic Beasts and Where to Find them thing where you collect magical beasts in your Mary Poppins suitcase and maybe collect things they like to kit out the suitcase and make it more homely for them, or certain items that attracts certain beasts to you, maybe you’d have to walk to a certain location to then release it back into its’ habitat, perhaps you can only get certain beasts in certain locations according to the Fantastic Beasts book… Basically a major Pokémon Go rip off with magical extras, maybe that sounds a bit repetitive but I really wouldn’t have minded that. This is a bit more… Everything. Do I want to save a baby hippogriff from a Confoundable whirlwind? Yeah! Of course! Do I want to save a poster from being on fire? Well… Not really, no… Do I want to save Filch and Mrs Norris from being chained up? No, he’s a dick, leave him there. Hogwarts and Ministry people trapped in ice? … I really don’t care. It doesn’t quite give you that “Look at this awesome thing I caught!!!” effect does it?

“What did you catch today?”

“Nice! Where did you get it?” Not quite the same…

I feel like Wizards Unite have tried to bring everything that could have been released later in updates or events out all at the same time and it’s just a little confusing. There’s just too much going on right now; greenhouses, potion brewing, fortresses, lore, ingredients, energy, a surprisingly RPG-esque skill tree when you level up, and so much more… I want to shout at the app and tell it to chill out for a sec. Even though I own a scarily large amount of Hufflepuff branded clothing and accessories in an attempt to make my life more magical the sad truth is that I’m just a muggle really and I’m struggling to take it all in. Unlike the utter simplicity of Pokémon Go, which made it inclusive for pretty much everyone, Unite is too much to take in for people that don’t know much (or anything) about Harry Potter, newcomers aren’t going to care about all this stuff. It makes me worry about what they’ll bring out when they do release an update with more features. More stuff clogging up my map? More lore? 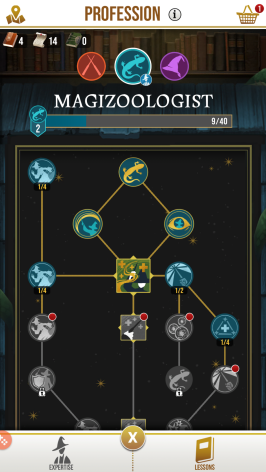 Speaking of lore, I think we’ve squeezed almost everything we possibly can out of the Harry Potter franchise. What else is there to know other than stuff JK Rowling seemingly dreams up on the fly and announces as canon on Twitter? Much like the god awful Hogwarts Mystery app that came out a while ago, the narrative they’ve tried to make in Unite is weak and in my opinion doesn’t really have a place in a game where you’re meant to be walking around most of the time. The only think that hasn’t been done yet, which I think would be pretty cool, is a TV series or something about the Marauders (feel free to take that idea Netflix, Amazon, anyone…)

My last big beef with this game is that I’ve been playing for a couple of days now and I do my fair share of walking, or rather I used to. If you want to unlock those Portmanteaus (eggs) you better not actually look at the app because you spend so long tapping the large amount of encounters, catching stuff, being told what you got as a reward, placing the image in the designated room (like a sticker book), and then maybe you got a special item and Constance or Harry will pop up to tell you about it, getting more energy to cast spells, growing plants, collecting ingredients… My lunch time walks have actually got much shorter. I’ve had the same 5k Portmanteau unlocking since I got the app and I’m still only up to about 3k. There is just way too much on-the-go admin to be done. I find myself standing around for way longer than I want to. In Pokémon Go you’d catch your Pokémon and tap on the Poké-stops as you went past and that was it. Yeah, maybe you had to stop for a minute or two sometimes to catch more powerful Pokémon but it never took that long. Then you’d get home, or sit down somewhere or whatever, you’d do your candy and achievements admin and voilà. Perhaps I need to manage my time with it better, but even if I did I still feel like I’d be standing around a lot.

The one thing I prefer immensely to Pokémon Go however (so far), are the fortresses. Granted, I haven’t played a lot of them yet, and I’ve only played them alone so far (queue the tiny violin.) These are the equivalent of gyms. You can go in alone or with a team and take on the monsters inside the fortresses. Each person plays a role, My profession is a Magizoologist so I’m a tank/healer, the Aurors are basically DPS, and I’m not sure what the Professors do, DPS as well I guess? The goal in a fortress is to take down all the monsters in the room before the timer runs out. This is the first part of the game that I have properly enjoyed, which surprised me as I was never bothered about gyms in the Pokémon era. I was working my way through the levels by myself and having a pretty good time. To be honest, I would enjoy this as its own game. I don’t know if you can join a stranger’s raid if you happen to be near the same fortress at the same time or if you have to be friends, I would assume anyone can join so maybe I need to find a more popular fortress… 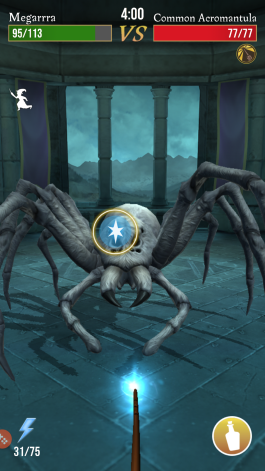 In conclusion… It’s not what I hoped, they’re just trying to do way too much all at once. I feel like they need to take some of the ideas of this game (I love the idea of an open wizarding world RPG, for example, there are so many possibilities for that) and put it on a console so that they can properly get their teeth into it and get a much more interesting plot together. When you ask people what they think of the app the response seems to be a pretty non-committal “yeah… I mean It’s OK but…” and most of my friends are Potter nerds so that says something. As bad as I feel saying it as well, it’s kind of made me want to start playing Pokémon Go again instead. I really want to like Unite, and I truly hope it gets an update to give it a big boost but until then I don’t think I’ll keep playing. I want to get my step count back up again.

Have you played Wizards Unite? What do you think? Do you agree or disagree with any of my points? Will you keep playing?

8 thoughts on “Wizards Unite Has Confounded Me”