We’ve all got our favourite video game characters. It’s very easy for me to go off on a tangent about my personal favourites, as I have many a time on my blog, you can’t read more than two posts in a row without seeing something about Link or Kratos. While lamenting the fact that I’ve probably exhausted all I can say about my favourites for now I had a particularly inspirational moment where I started thinking about NPCs: The Non Playable Characters that make up the world you’re in. Some can be good, some can be bad, some you can get weirdly emotionally attached to, they all have their place and without them the game would be very boring.
I started off writing a “Top 10 NPCs list” but to be honest with you it was all characters from the same old games I play: Legend of Zelda, Pokémon, Dragon Age… Just different characters. I always talk about the same games, which isn’t a bad thing really as they’re all good, I just need to get a bit more variety going on, that and you’re all probably like “oh, Stardew Valley, wasn’t expecting that, it’s only been a week since she mentioned it”. Very aware of this, I reached out to a couple of my geeky friends (and my gamer dad) to get some of their input on theor most memorable NPCs. I thought I’d only get a couple of suggestions… My phone would not stop beeping all evening, it appeared I had touched on something they found pretty interesting. As a result I now have a diverse list with some games that I’ve not even played on it! I haven’t even ranked them because I haven’t played some of these games so I can’t really say, also I didn’t want to deal with texts from friends that helped me out with the post saying stuff like “what do you mean you ranked Shadowmere after Busty Barmaid???” so to avoid this, not only are the in alphabetical order but but I have put them in two categories: Main Characters and Background Characters. I mean, I can’t put Sephiroth from Final Fantasy VII on the same list as Noober from Baldur’s Gate, even if they are both NPCs. I’ve also put who chose them in brackets.

Also, as everyone kept saying Portal and Undertale I’ve eliminated them as options because it’s wasn’t really fair to the other games.

We’ll start with the big kahunas, the Main Characters.
These are all the NPCs that have impacted the story of the game in a major way.

“In 2004 you just didn’t have facial animations as good as hers, but she was also an audience surrogate as your character is mute so she basically talks for you and you manage to build a relationship with her even though you don’t say a word and you end up genuinely caring about her.”

She may not be particularly sassy or have any memorable lines but when I was growing up Aribeth was one of my feminist icons. Seeing a woman in a leadership position in this absolutely massive game was wonderful and I was fully invested in her story. If you need more convincing just look at that armour she’s wearing, verging on impractical maybe but so fierce. Absolute Queen.

Claptrap was a huge breath of fresh air, as was the whole Borderlands series really but everyone agreed that we are focusing on Borderlands 2 specifically. Claptrap clumsily guides you through the game sounding like he’s having a great time when he’s actually being incredibly sarcastic and kinda depressed. That’s all part of his charm though! If you knew him IRL you’d probably find him extremely annoying, as many of the game’s other NPCs do, but he really does come out with some gold:

“You may wonder why I don’t just take a replacement eye from one of these broken Claptraps. Two reasons: firstly, because me and my eye have been through a lot. Secondly, because shut up.”

“He is just so incredibly annoying, and finally catching him and giving him an agonising death is just so satisfying. The dark humour is great when he’s going off on a tangent about honour and betrayal but Kratos is eyeing up his boots and then you get to chop his legs off and steal them.”

I truly believe that Midna is by far the best Legend of Zelda companion. She is funny, she’s not annoying, she has the best storyline and character arc out of all the companions by far and she just looks amazing, in both of her forms. This is a princess that gets her hands dirty, she goes through so much trying to fight for her people, and the people of Hyrule too and when she gets mad she tries to take on Ganon herself in one of the most badass transformations ever. When she was revealed to be the princess at the end I was really shocked at the twist and so happy that she was still her cheeky self (*cough* Tetra).

Ben: “Moira is an inventor, philanthropist and all around crazy girl. She has one of the most memorable quest lines in any game I’ve played, sending you to all corners of the wasteland to experience its delights, including but not limited to crossing minefields, exposing yourself to some serious radiation and exploding mole rat heads (delightfully messy), all to complete her survival guide. She has a unique charm in an otherwise pretty desolate world, and an air of positivity everyone else seems to lack. Plus mini nuke.”

Gary: “She’s a pain in the arse. The worst part about restarting Fallout 3 is her. She offers an interesting quest line but her voice is so grating. I tried to blow her up with a nuke and she was the only person in town that survived.”

“He’s a big hulking, stalking bastard who never stops following you and is completely invincible. He follows you throughout the whole police station. You love to hate him because everyone’s obsessed with him but he’s such an arsehole. He can’t touch you on certain levels but he tracks you in real time, for example if you’re on the other side of the station to him and you make too much noise he’ll hear you and track your approximate location. It was absoloutely genius the way it was all designed, I love it. He absoloutely makes the game and sets a new standard for horror in games. 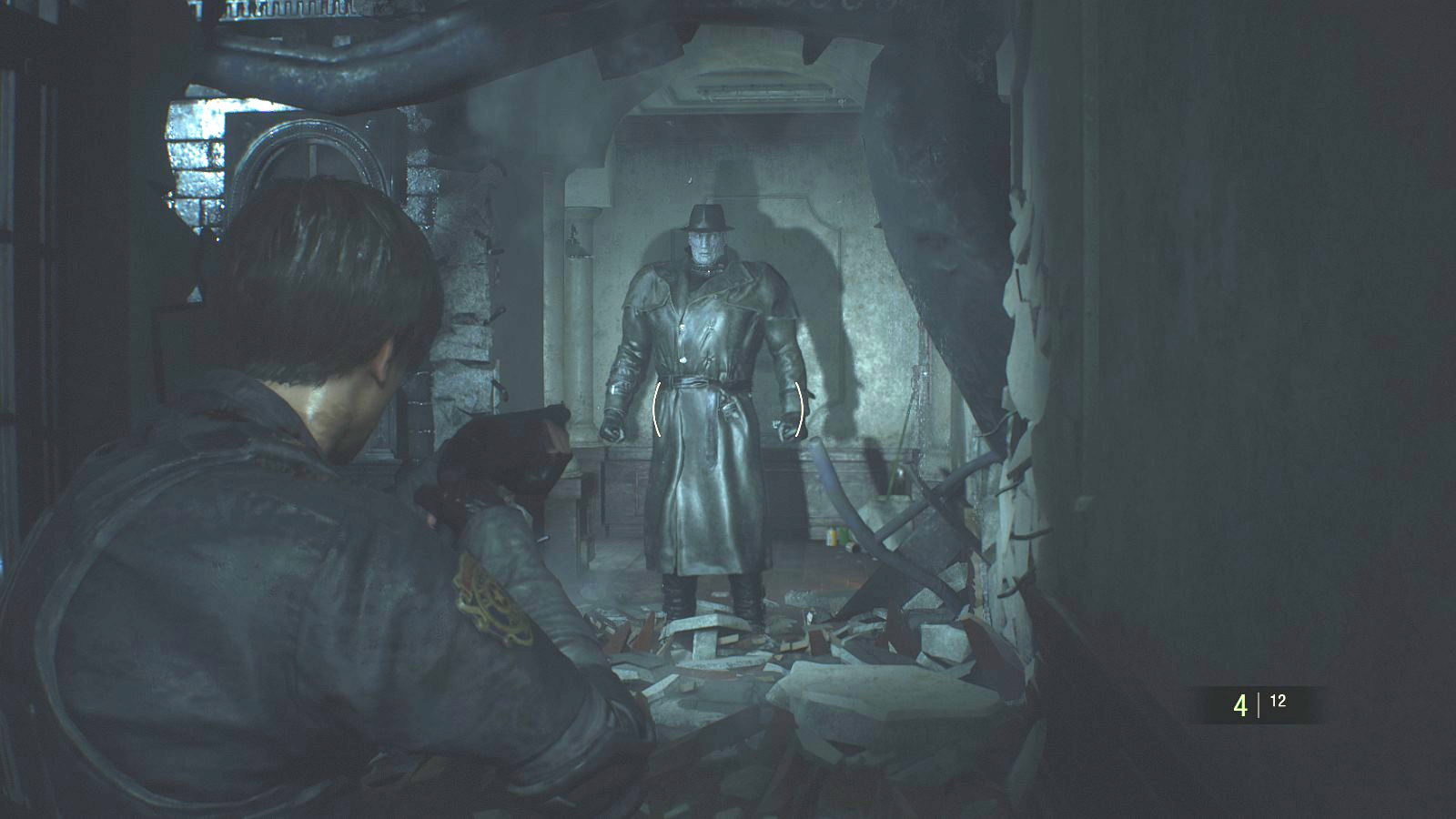 Navi – The Legend of Zelda: Ocarina of Time (Ben and Gary)

Another Ben and Gary one, I really should get them together at some point so that they can talk about their favourite games together.

Ben: “Possessing an expansive vocabulary (her words won’t leave my mind), Navi guides Link through his adventures in Hyrule with a series of helpful clues and tips; it’s almost certain the hero would have defeated Ganon in half the time if he’d only paused to listen. Watch our for her 10 hour loop on YouTube.”

Gary: “She’s a pain but she guided millions of players into 3D gameplay.”

“He’s the greatest villain ever because you sympathise with him and his motivations. He was experimented on when he was a child and made into a soldier, so you feel for him and can understand his descent into madness. I think he was the first villain I really sympathized with and it made me understand that evil is man-made. Plus he’s badass.”

Busty Barmaid – Baldur’s Gate: Dark Alliance. (Wish I could say this was one of my friends choices but it was my Dad)

Her name is Alyth Eleandra, but that really wasn’t the memorable part.

“They were just ridiculous, they defied physics and moved independantly. Whoever made her obviously had a great time, they held back in the second game though.”

There was no way this post was happening without Lydia. She’s one of the first NPCs I thought of and when I asked my dad for his favourite or most memorable NPC Lydia was one of the first that came to mind for him as well. She complains, she’s not much in the way of conversation, she has a knack for setting off traps and getting lost, her most likely cause of death is standing in front of you when you are attacking someone else… But we love her anyway. The world of Skyrim is just a little duller without that moment where you turn around and say, “where the hell is Lydia?” and have to retrace your steps only to find her glitching into a door in a tomb you raided about 2 hours ago.

Letting go of Lydia is one of the hardest things in a Skyrim player’s journey as this video from TobyGames shows (about 50 seconds in):

You don’t know annoying until you meet this guy. He will automatically open up dialogue with you as you pass through Nashkel and say trivial stuff like “ugh, I think I stepped in something” you’ll walk 2 steps and another box opens “What time is it?” So. Annoying. You can just turn around and kill him, which is extremely satisfying, but if you tolerate him for the whole 32 interruptions you get a nice 400 XP. Noober is definitely not an NPC that anyone is particularly fond of, but he is very memorable.

“Shadowmere is the greatest companion ever. He’s immortal, he can beat up Dragons, the best part is you can ‘kill’ him (knock him out) and use him as extra storage. Also, he’s cute as.”

“Look at all the arrows that are in him and he’s still trucking on.”

That’s the end of my list for now, who are your most memorable NPCs? Were they annoying, funny, or just super cute? Do you agree or disagree with any on our list? Let me know in the comments, it’s been really interesting to see what everyone thought of and I’d love to hear more!