It all started with watching a YouTube playthrough of an oldish game called Spore, it looked like a lot of fun and, my other half and I decided to download it. This was mostly pushed by me to be honest, once I see a game where you make a thing and raise the thing and help it grow and take over the world and stuff I just want to play it. Don’t ask me why, I just do. The aim of the game is to evolve your creature from a tiny microbe thing to a creature that stumbles onto land, to eventually developing a civilisation and stuff. As you play through the game you collect different body parts for your creature that will give you better stats… This game is also super adorable because you can make friends with other creatures by singing, dancing and posing… Or you can eat everyone and extinct their species to become the supreme ruler, each to their own.

The game starts off with your little creature just swimming around eating things to become bigger. I was a herbivore so I wasn’t huge on attacking, my race is a peaceful race (although you can choose to attack even if you’re a herbivore, it’s just more difficult because you don’t tend to get as many aggressive body parts). Eventually my creature grew strong enough to develop legs and move onto the surface of the planet, where I then ran around meeting tribes of other creatures that I allied with by singing at them, I was really enjoying this but then I managed to move to the next stage of evolution and suddenly I was basically playing Age of Empires. The whole style of gameplay completely changed, going from me controlling my little creature running around singing and dancing to a top-down view of a little village where I suddenly had control of multiple creatures and I has to assign them tasks like chopping wood and collecting food and building… So just like that my nice relaxing “oh look there’s a little group of duck things over there let’s go and make friends!” became “THE GREEN SEAWEED CREATURES ARE ATTACKING!!! ATTACK!!! STOP COLLECTING WOOD! OH GOD, EVERYONE’S DEAD!!!” It was a very weird change. As I said before this part was very reminiscent of Age of Empires (albeit with a weird winged platypus-esque civilisation) and my other half who was watching me play started getting nostalgic for Empire Earth (which he used to play and which looks to be exactly like Age of Empires, hence my use of Empires in the comparison above as I know that one better…) that game and decided to download it.

I was a little young when Age of Empires was out but I remember my dad playing it and giving it a go when I was a little older but being so young I found it really difficult and to be honest I thought the cavemen were kind of scary although I couldn’t tell you why (it might have been their voices). I did give Empire Earth a go once my other half had downloaded it but I found it difficult. How does the red team get an army and build stuff so fast?! It’s literally impossible to keep up with them. After that I spent a while watching Dan play, I just wasn’t that into it, and then it was my turn to get nostalgic. While I was too young for Age of Empires (or Empire Earth, whatever, they seem to be more or less the same thing) another game came out later at the perfect time when I was happened to be really into Greek mythology (bit random, I know. I had a Greek mythology story book and it was one of my favourite things ever)… Age of Mythology. 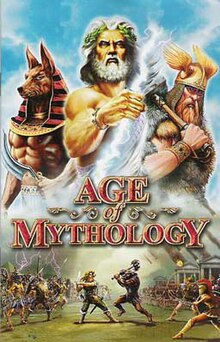 Now that game was absolutely, undoubtedly, AWESOME. If you don’t know it it’s basically Age of Empires but you start off as either Greek, Norse, or Egyptian and you level up your civilisation by worshipping minor gods (so if your main god was Zeus you’d advance with Athena, Apollo, and Hera, for example). Each minor god comes with perks and mythological monsters that you can include in your army (like the Minotaur or the Hydra). I loved it so much. Another great thing about that game was actually the campaign. You wouldn’t think that the campaign for a game like that would be very interesting and yeah… The beginning of it is basically “walk here… well done you finished the level” but later it could get really tricky and I got really into it, mainly because of the addition of heroes that I read about in my books like Ajax and Odysseus.

You’d have thought that I would have enjoyed playing Empire Earth the other day because they are so similar but honestly… I just couldn’t get into it and I think that what I don’t like about it is it’s too real. I don’t want to bomb people and attack them with guns… I want to attack them with an army of Minotaur that the goddess Athena gifted to me after I made several villagers worship her at the temple for hours on end. Honestly one of my main thoughts about Age of Mythology is how insane the villagers’ abs that worship at the temples must be.

I’m now patiently waiting for my other half to finish his nostalgia trip so that I can use the computer to download Age of Mythology. Did you play this game? How about Age of Empires/Empire Earth? Maybe even Spore? Do you like these sort of games?

9 thoughts on “Age of Nostalgia”