*slips on sunglasses* I’m not sure anyone will know about this game, it’s just one of those things I found in the back of the internet, the graphics are really retro, so old school… *adjusts man-bun* It’s basically a Sandbox Video Game, I totally knew that already and not because I Googled it just now *sips pumpkin spice latté* It’s called Minecraft but you’ve probably never heard of it *eats a whole avocado, including the skin and stone*.

I honestly don’t know how I managed to avoid Minecraft for such a long time because it is EVERYWHERE. I knew about it of course but another game always came along instead and it kept getting pushed aside. I think what pushed me over the edge was the excellent Rick and Morty episode “The Rickchurian Mortydate” where they talk about Minecraft and it just put it in my mind. Later I was browsing the Playstation Store, drooling over games and imagining having time to play them all when I came across the “recommended for you” section. “Because you played Stardew Valley… Minecraft”. Well maybe I’ll just try the free demo, just to see what all the fuss is about, I mean I love Stardew so why not this? About an hour later I’d bought the game and was happily setting up my shelter. 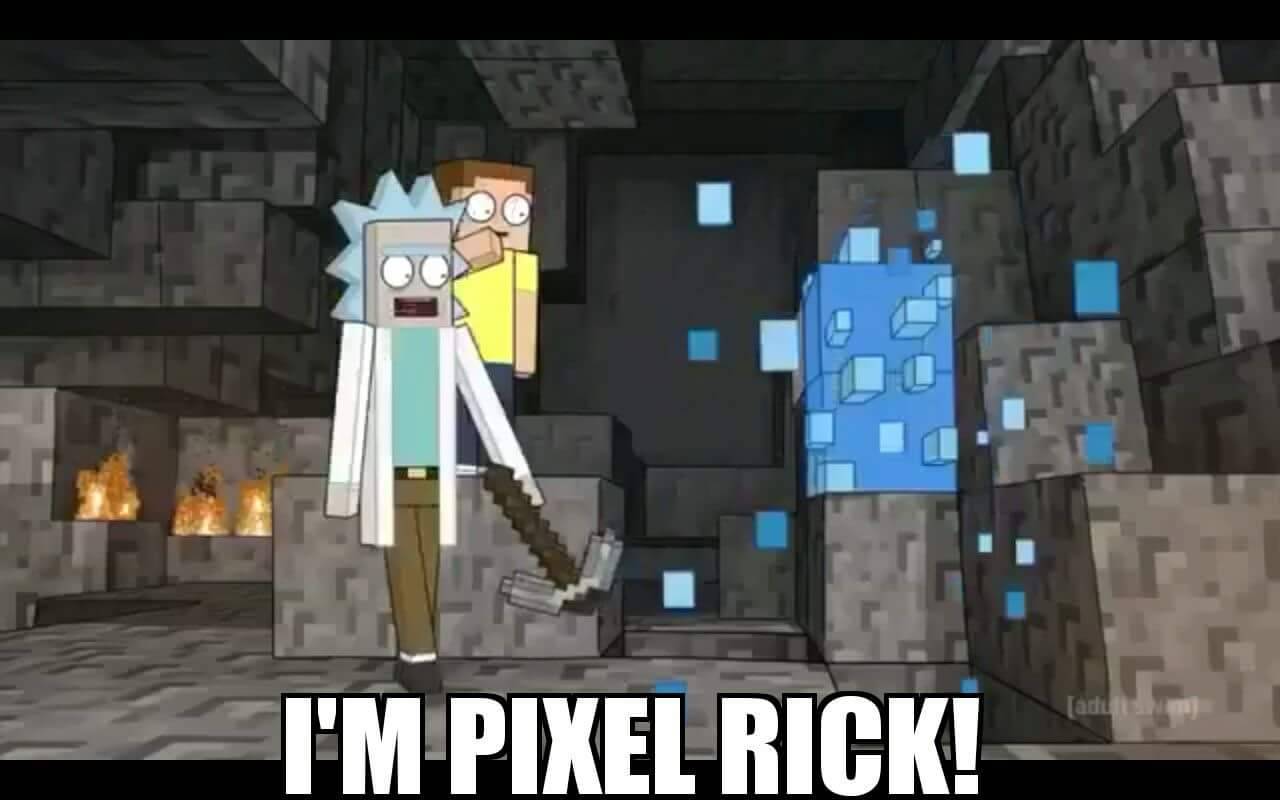 One thing I’ve learned, living as part of a gamer couple, is that if one of you is playing a game chances are the other person will also want to play it. Sure enough, within an hour of my game time my Companion Cube had also downloaded it and an eerie silence had settled over our living room, occasionally interrupted by something like “how did you make that?” and “don’t you dare you damn Creeper, get away from my house you green twat… GOD DAMMIT!!!”. We played it in our own separate worlds for a bit and after a few days we decided to have a shared world where we would make a huge castle together. We found the perfect spot and started building… Dan had a specific design in mind for our castle and that was fine with me because to be honest I’m not much for the building side of games, I get bored of big projects very quickly but if someone is directing me I’m more likely to stick with it. Now we come to something else I’ve learned as one half of a gaming couple: One of you tends to get more into it than the other. I thought I got easily hooked on games but Dan takes it to a whole new level (pun intended). I love sleep too much to sacrifice too much of it to gaming time and sometimes I prefer to just put on Ru Paul’s Drag Race and paint my nails or something rather than game but I genuinely worry that if I didn’t put food in front of Dan sometimes he’d rather die of starvation than miss out on gaming time by getting up to cook. My point is he got so into Minecraft and completely took over the construction of our castle. He wouldn’t let me touch anything in case I did something wrong. You should have heard the horror in his voice when I said I’d made some floorboards to put down because it didn’t go with his plan. I eventually drifted away from the castle and left him to it, occasionally returning to explore some mines with him and stuff.

Instead I started a new world and got Dan to choose a place for me to build an epic house in Creative Mode, once that was done I closed my eyes and was placed somewhere else random on the map and then began playing in Survival Mode. The plan was I’d build up all my resources and set out on an epic adventure to find my lost temple. This was somewhat anti-climatic when I found the temple about a 3 minute run away from my starting point hidden behind a big hill. Never mind.

On this particular map I was really well placed in that there were loads of caves nearby that were full of ore and monster spawners (and therefore lots of treasure!) so I ended up with loads of awesome stuff… Or rather I did temporarily. I have a terrible habit of dying a lot in Minecraft and losing all my loot. It’s a bit weird, I’m quite happy above ground pottering along with my animal pens, farming, fishing, protecting my house from monsters, etc but as soon as I get into the caves and have to face a horde of zombies and lava I just lose all gaming ability. I’m actually pretty bad at the mines in Stardew as well so it seems like it’s a recurring theme.

My addiction to it lost steam pretty quickly to be honest, but it’s one of those games that I can just pick up and wander about doing whatever if I only have 20 minutes to spare so that’s good. I guess now I just need to play some Pokémon Sun and Moon, Mario Odyssey, Breath of the Wild and Animal Crossing to catch up on the gaming world.

To tie off this post here’s a couple of pictures of actually cool things my other half made in Minecraft that don’t have dick shaped buildings in them!

Are you a Minecraft player? (Or were you?) Do you ever start playing games ages after they came out? What would your man focus be in Minecraft? Exploring, building, survival? or just a big mix of everything?

19 thoughts on “Late to the Block Party”