I don’t know why but playing Pokémon while I’m on holiday is one of my favourite things to do (second favourite next to reading a good book), I’ll happily lie by the sea/swimming pool with a cocktail and play through a Pokémon game. This holiday my boyfriend came with me and we went to France to my parents’ house to dog-sit for them while they were away. Dan suggested a challenge where we assign numbers to the 17 different Pokémon types (excluding fairy) and then we are randomly assigned a number, he got Steel and I got Psychic (I originally got Ice but in the version we’re going to play there’s only like 6 ice Pokémon and they’re all quite far into the game).

The versions we are playing are both Sapphire, however he has downloaded the original Sapphire on his phone to play through while I have my Alpha Sapphire game on my 3DS. We were going to race to see who finished first but what with the phone vs 3DS way of playing it seems like that might not be fair. As he is playing on his phone he was able to do some sort of cheat to get all of his Steel Pokémon straight away as, like with me being unable to get ice type Pokémon early in the game, he couldn’t get them at the beginning. They all started at level 2. 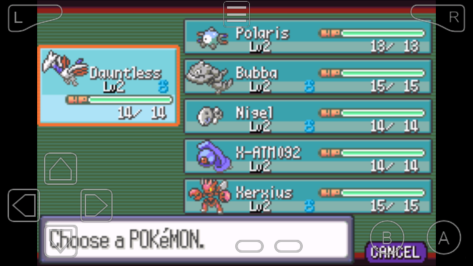 I am playing through on my 3DS though as I just find that it’s better, I love my 3DS! I played through with a starter until I got to the first Psychic type (Ralts) and then I released the starter Pokémon (that always makes me sad) and just continued as if Ralts was the starter, I forgot how long you have to wait until you get the next Psychic type so I just had a Ralts for ages and it got very over-levelled. I did have to temporarily catch a Zigzagoon to get past Team Aqua as well because Mightyena is immune to Psychic moves, and if I get stuck fighting a dark type Pokémon, as it’s really effective against Ralts, I’m done for and I’ve actually died a couple of times to my shame! I have never found Team Aqua to be a challenge until now.

So as Dan is playing it on his phone he can play the game sped up, and at first I thought that that may let him get through a lot faster than me but then I only have one Pokémon and it’s really over-levelled, plus they introduced bits in Alpha Sapphire where once you have finished certain quests someone will say “would you like to return to Slateport with me?” and then rather than have to make your way back on foot you just warp there. We keep overtaking each other, right now he’s in the lead. I don’t know which of us has the best way to do it, I guess only time will tell but on our track record so far Dan always gets through the Elite Four while I’m still on like the 5th gym or something in a normal playthrough. I like to take my time in my defence but maybe having less Pokémon will speed me up a bit. Also, I have a history of being terrible at Nuzlocke challenges, usually wiping out halfway through the game.

As it stands right now, he’s just finished the Team Aqua hideout and I am about to start it. We both have full teams of Pokémon now and I have suddenly found myself being showered with Psychic types, mainly thanks to the Safari zone and Mount Pyre which means that I have some really overpowered Pokémon and some normal level Pokémon. I don’t like it, I usually try and have them all be about the same level.

Would you rather play on your phone using an emulator or on a DS? Have you ever done a Pokémon challenge? Do you know of any Pokémon challenges other than a type challenge or a Nuzlocke? I’m always interested to try new ones!