Allow me to tell you a brief tale of gaming woe. A few years ago I bought Dark Souls 1, I was so full of hope and gaming ambition. I had heard that it was notoriously difficult but I was a dedicated gamer and wanted to prove myself. Looking back at that time I cringe to think of my naivety and doomed optimism as I marched into CEX and bought a copy, chatted to the guy behind the desk about it and heard all about his horrendous experience of playing it. I told him how determined I was and that I would finish it. You can see where this is going. I realised my terrible mistake almost straight away. To try and put in perspective how angry I got at this game, at the time I was a student living with another girl who had a very light, if existent at all, interest in video games. The screams, curses and furious tea making were enough to make even her take an interest in my play through and she would sit with me and cheer me on as I died time and time again. I managed to defeat the Taurus Demon (the second boss) but not long after that I stopped. I had to admit defeat and took it back to the secondhand shop where I had bought it three days previously and sold it back to them, I had no wish to try and play it later as I usually do with games I struggle with, the fact was I simply wasn’t enjoying it and the “boast factor” that I would get for completing the game just wasn’t enough motivation for me to continue. The only luck I had was that the guy behind the counter when I returned the game was not the same one as when I had bought it.

From this story you can understand my hesitance to try Bloodborne. I loved the look of this game when it came out and it is one of my favourite playthroughs on the Game Grumps YouTube channel but I was wary of wasting money on it. I eventually ended up buying it for two reasons, number one being that the main gamer in Game Grumps is notoriously bad at video games (he’s not really but he misses a lot of stuff that would make his play throughs easier and clearer) and yet he completed it, number two was that my boyfriend bought it and played through it. This was enough for me to think “well if they can do it, so can I”. So with that allow me to introduce Cleavopatra.

I put quite a bit of time into creating her (although after a while agonising over hair colour and nose ridge placement I got a bit bored and skipped through most of the rest), and I’m glad to see that all that time did not got to waste. 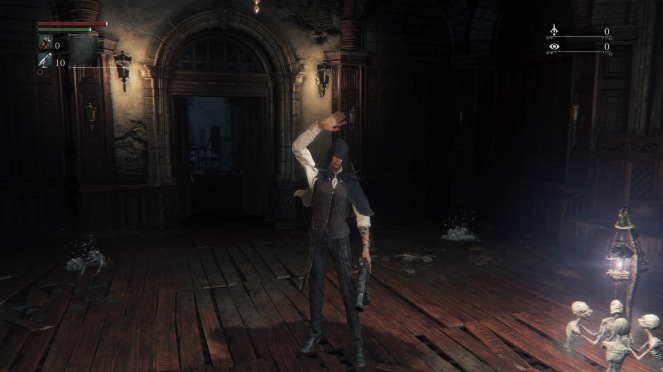 I have not got far yet but despite a few things which I know are very in line with the Dark Souls games (i.e. few and far between saving points, unclear explanations of what to do, etc.) I am enjoying it. It is repetitive having to go through everything over and over though. My main error at the beginning was I didn’t realise that in order to level up you can just let the Cleric Beast kill you, kill a few baddies and voila. I collected A LOT of blood echoes, got its health down by half but it got me, and then of course I lost them all on my way back to it later. Lesson learned!

My big problem at the moment, which would make the game SO much easier if it was resolved, is that I am struggling to do the front-on visceral attack where you shoot and then move in to deal a shit-ton of damage. I have only managed to do this once and that was by panicking and mashing buttons in what happened to be the right sequence. Not my proudest moment. I know how to do it and have been practising on the Townspeople but they seem to recover far too quickly between my shooting and moving in close enough to initiate the attack. It probably doesn’t help that because I have been playing Batman recently I keep thinking X is the dodge button.

Despite my initial struggles with it I will definitely continue with this game. If anyone has any tips for me please let me know!

5 thoughts on “Bloodborne: the story of Cleavopatra (so far)”